As some of you will know the 24th of this month marks 20 years since the day I was diagnosed with Type 1 Diabetes.
I had planned to do a charity skydive for the Juvenile Diabetes Research Foundation (JDRF) to celebrate the occasion but as I've been diagnosed with Carpal Tunnel Syndrome my GP refused to sign my medical consent form so instead I've gone for the slightly less exciting option of doing a series of blog posts about my diagnosis and what's happened since then.
The first post is by my wonderful Mom, Lynda........ x

24th May 1991 - The question I was dreading - "I won't have to have an injection will I?".  We were on our way to hospital to have the GP's diagnosis of Type 1 Diabetes confirmed.

How do you explain to your 10 year old daughter that she would have to inject herself for the rest of her life?


Rebecca had always been terrified of injections since being in and out of hosptial with asthma attacks since the age of 4 - any attempt to take blood was an absolute nightmare! 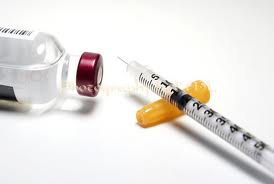 We had a huge amount to learn and spent hours at the supermarket reading all the ingredients on packets and tins - it was ridiculous but we were so frightened about getting it wrong!

Diabetes comes with an amazing amount of "stuff" which fills cupboards and fridges - syringes (in those days), insulin, blood testing monitor and strips, Glucagon etc. etc. and one person's comment of "Oh well you can control that can't you?" still fills me with rage - You try it!!!
Life continued and we had great support from the diabetic team at our local hospital - Consultant, Janet Anderson and DSN, Gill Salt in particular but Diabetes is constantly there however much you try to carry on as normal.

Then Rebecca became a TEENAGER and denial set in! She became less dependant on me and it was difficult to monitor her eating habits when she wasn't at home (and even when she was to be honest!).
She wasn't monitoring her blood sugars regularly and found it hard to be different from her friends.
Chocolate became almost an addiction and I would find sweet wrappers hidden in her room (yes - I did search her room).  On several occasions I filled a carrier bag with them!
It was a constant battle and no amount of reasoning, shouting, crying or pleading made any difference - I could do nothing and it hurt.
I have always wished it had been me and not Rebecca with Diabetes but no more than at this time. She should have been free to be a teenager and not have to cope with this horrible condition.


20 Years On........
Rebecca has now finally realised what having Diabetes means to her health and is doing her best to turn this around - she has written about all the problems she has so I won't go into that.
She knows she cannot turn the closck back and undo the damage but is working hard to improve things and got funding for an insulin pump in August 2010.

She has adapted to this amazingly well and although it is not ideal to have something permanently attached it does seem to have had a positive effect on her blood sugars and her HbA1c is coming down.

I think the Diabetic Online Community (DOC) and her blog have helped her enormously - so thank you to all of you out there who have been supporting her.

While I am doing "thank you's" - feels like an award ceremony! - Thank you also to my wonderful parents for always being there and running Bec to hospital appointments etc. when needed, it helps a lot!!
Also to her partner, Gareth, who has also been a big support particularly when she was agonising about whether to go for the pump or not.


I think Poppy and Daisy (her 2 adorable Bichon Frise's) deserve a mention as it's impossible to be down with them around!

And finally.........Diabetes is only a small part of you Bec, I'm so proud of you and love you very much. xxxxxxxxxxxx


Me, Rebecca, Poppy and Daisy 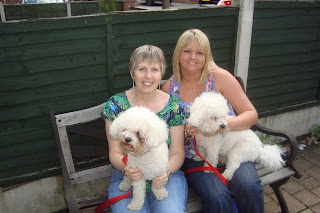 Bec
Wolverhampton, West Midlands, United Kingdom
I have had Type 1 Diabetes for 20 years. I have been inspired by the Diabetes 365 Project and various diabetes blogs that I have been reading, to do my own photo diary/blog. I have been writing this blog for about a year on and off and have found it to be really theraputic to put into words how I feel about Diabetes and how it affects a persons life on a daily basis. It has helped me and I hope it can help others who may be newly diagnosed or maybe friends or family of a person with Diabetes may find it useful in helping them to understand how it feels to have Diabetes and what life can be like.....